As a sex blogger, educator, and coach, I have had the honour of helping individuals reach deep into themselves to unleash desires that were long repressed and forgotten. Sexuality is as natural as breathing. It is a critical pillar in our overall well-being, regardless of where you lay on the spectrum. Understanding yourself on this level will have an overall impact on your relationships, joy and self-esteem. It is important work, and is needed now more than ever. #qaurantine For this reason I invite you to work with me, to set yourself free. I have exclusive monthly subscription packages specific for helping people during this time! Reach out for more info ❤️ #youreinvites #italksex #sexed101 #sexnerd #sexeducatorlife #sexbloggerlife #sexblog #sexblogger #quarantinesexchallenge #sexcoach #sexcoaching #bdsm #kink #vanilla #allarewelcome #exclusive #exclusivepackage
There is no “one size fits all” when it comes to sexual desires and expression. #italksex #sexed101 #sexnerd #sexeducatorlife #sexblog #sexblogger #writersofinstagram #intimacy #selfexpression #desire
Yes, Our experience is individual, and our desires are diverse... 🖤 #italksex #sexblogger #sexblog #sexcoach #liberateyourself #lifestyle
Today #ontheblog I’ll let you in on how we keep it 🔥during quarantine. Check out link in bio... 🤍 #sexblogger #quarantinesextivities #keepingthingsfun #openrelationship #tinder #lifestyle #sexcoach #sexcoaching #italksex #sexnerd #sexeducatorlife #writing #writingcommunity #writer
I want to know what’s on your mind! 🤍 #qanda #topics #sexuality #sexblogger #askmeanything #itbegins
I’m back... And ready to give the dets on how to keep quarantine 🔥 🤍 #sexblogger #sexuality #quarantinelife
The Good Girl Game... • The hubby set up a night of fun. Follow link in bio for this week’s article. • #ontheblog #jointheparty #roleplay #royals #goodgirl #pigtails #schoolgirl #sexblogger #humansexuality #allforfun #wifey
...and that’s where it all began. • #relationshipgoals #datenightideas #datenight #reconnecting #relationship #sexblogger #humansexuality #roleplay #sexgames
Royals, This month is all about BALANCE. Realigning the body and mind. Take the journey with me by subscribing to Club Royal today (DM me or follow link in bio). • #31daychallenge #jointheparty #crewlove #sexblogger #relationships #humansexuality 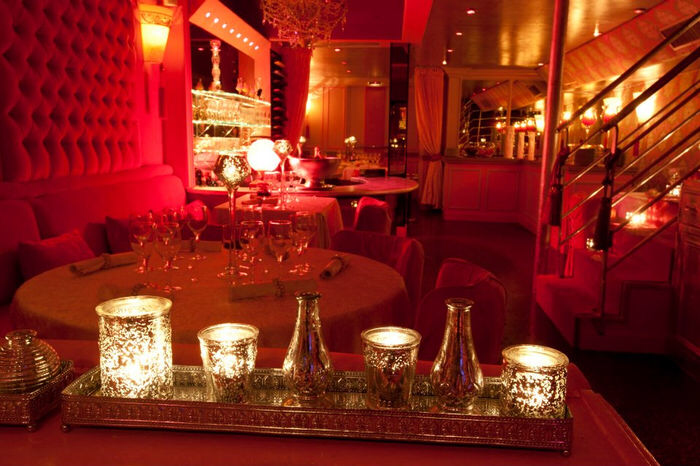 My evening at the famous sex club, Paris

Master and I walked down a small avenue in Paris, looking for door number 1 – literally, that was the address. We must have walked by it three times, as it was so discreet. When we finally took notice of the inconspicuous blue door, our nerves flared.

We stepped into the tiny waiting room, just outside of the lobby, giggling and kissing one another. The black walls that surrounded us were marbled with gold. That six-by-six space already held such intense energy, and we were not alone.

An older couple – probably mid 50’s – eagerly awaited the doorman. After a few moments, this large body – a tall, handsome, well-dressed, serious, gay man – opened the gates to Les Chandelles: our dreamland. He looked at the couple in front of us, and nearly turned them away. I hadn’t understood the problem, as the woman was in a sexy, black dress, and the man who accompanied her sported an elegant white suit jacket, and dress pants. That’s when Master J subtly pointed to the man’s feet. He wore a casual, high quality sneaker. Our beautiful doorman took notice, and told them it was against dress code. The gentleman in sneakers begged, telling him that he and his wife had travelled a long way to visit Les Chandelles. Eventually they were granted access, but it was a close call.

Master J and I, having already understood the strict dress code, entered without issue. He, in a blue suit; me, sporting a mini-black dress, with the black, leather straps of my breast harness visible. We had fit the profile perfectly.

You may remember this little number from previous posts.

In the red velvet lobby of Les Chandelles, Master J and I were required to hand over our coats, phones, and any other loose items we had, with the exception of a present Master J had brought for me. Once checked in, the doorman led us down one flight of stairs, into a dimly lit restaurant. Similar to Moon City, the room was illuminated by a red glow, only instead of the temple theme of Moon City, Les Chandelles’ décor was much more sophisticated: cushioned booths and pillows, chandeliers, candles, rouge upholstered walls, tiny bowls of chocolate covered almonds…basically an environment any woman with a deep love for Victorian class (and chocolate) would melt in.

Without going into the detail about the food, as this is not a food/restaurant review blog, I must say, should you ever go, do not skip out on the cheese cake. I had my first (and only) orgasm that night the second I put it in my mouth.

Once the meal was complete, and wine glasses emptied, it was time to make our way underground…

Another staircase down we discovered the club. Imagine a cave of wonders, only the wonders were in the form of beautiful humans and candy buffets (I shit you not, they had one!)!

Entrance to the underground club of Les Chandelles – including the candy buffet to the left.

When you walk into the club, directly in front of you is a small lounge. The walls are lined with more of those beautiful cushioned couches, and in the centre of the floor is a stripper pole. To the right of the lounge are archways into the night club – a long, cocktail bar, booths around the perimeter of the dance floor, and yet again, another stripper pole. But those weren’t the spaces we were most curious about. It was to the left of the lounge – behind the curtains – where the hedonists go to play.

Prior to my experiences, when I heard the term “sex den” I’d imagined exactly this: Les Salles de Les Chandelles.

You literally move out of the light and into the dark. The walls are stone. It feels like you’re inside a medieval prison – which for me, just adds to the eroticism. There are two rooms at Les Chandelles. One that includes two large, raised, mattressed areas, and a booth-like stool that is fixed to, and lines the perimeter of, the far wall. The mattresses are more for group sex, whereby the stools give very little space for even couples (I knelt on it, while Master J stood on the floor behind me). The second room is like the first, only much (and I mean much) smaller. Whether it’s because of it’s size, or it’s just the most popular space in the place, don’t even consider going in unless you have the intention of fucking and being fucked. In other words, you can’t tell where one human ends and the other begins.

The only “private” space at Les Chandelles, is a petite opening in the wall, just off the large sex room. It is big enough for two people; however, anyone passing by can watch at any time.

Although it was an aesthetic dream come true for me– you know, Victorian class mixed with the medieval prison – it was one of the most frustrating clubs I’d ever been to. It was impossible to have sex. There was simply no room, unless, as I’d mentioned before, you want to get fucked (or at least groped) by someone else.

Just to put it into perspective:

– Master J, as I’d mentioned, had been penetrating me from behind as I knelt on the stool in the large sex room. Literally, every time someone walked behind us (which was contantly), I had a hand graze or grope some part of my body (other than my genitals themselves). Master J had to tell several people that we weren’t into group sex or switching. These people never verbally asked us, they simply just started touching me – both men and women. We weren’t offended by this, as it is a swingers club, and therefore it is almost expected, if I can say that. But my issue, as I mentioned in my last post about Moon City, is that I’m used to a certain type of verbal exchange in regards to receiving and granting permission. Don’t get me wrong, once you say no, those people respect your space. It’s just, for someone who actually enjoys having sex amongst others, it was very distracting to constantly be rejecting interested bodies, when I just wanted to be present with Master J. At some point, we just gave up and stopped having sex because it was impossible to stay focused on each other.

– After leaving the sex area, we took a drink to the lounge. Within five minutes of us sitting down, two couples started fucking right against the wall….literally twelve inches from where we sat. We were totally cool with it, and the guy in the couple closest to us actually started a conversation with us while he was fucking his woman. It was a comical experience. But, the reason why I bring this up is because the bouncers confronted both couples, telling them they were not allowed to have sex in the lounge, just in les salles. The man, who had been speaking to us, responded to that with, “Where exactly? Should I just hop on top of the others, and fuck my woman on someone else’s back?”

In other words, the rooms were overflowing.

To sum it all up, Les Chandelles was a surprising experience, both for good and not-so good reasons. Of course, the beginning of the evening – the restaurant, and the earlier hours within the club – were the most enjoyable, as it hadn’t yet become overwhelmingly full. We had gone on a “couples only” night, and the entire charade – which included dinner, a bottle of wine, two rounds of cocktails and access to the club – cost approximately €300, which Master J and I later agreed was worth the experience; however, we would most likely never return. We concluded that there are less expensive clubs that guarantee a good time (if you know what I mean).

Of course, as my readers know by now, Master J and I aren’t swingers. And, unfortunately, most sex clubs are specific to that lifestyle. This is why I’m not too harsh on these places, because I understand that as a non-swinger, it is unrealistic to think certain things (such as being asked constantly to fuck other people) won’t happen. If you are a swinger – especially if you’re turned on by the idea of group sex – Les Chandelles may be just the place for you! If you’re someone who just likes to party in unique (and erotic) places, even without the intention of doing the dirty, why not? Hit it up! As I said, it truly is a beautiful club, and it’s definitely a place you won’t easily forget.

So, tell me, what would be your ideal sex club? And is there anything else you’d like to know about this one?

Author, Sex Coach, Creator & Writer of Call of the Quean. For more about me, visit page: Meet the Quean. View all posts by queanmo

One thought on “Les Chandelles”